Skip to content
Blog > What My Father Taught Me About Life, Carpentry, & Hard Work

What My Father Taught Me About Life, Carpentry, & Hard Work I like to think that I am like my dad — the good parts, of course. There weren’t actually any bad parts, just some that you might not want to display in mixed company.

My father immigrated to the U.S from Valleyfield, Quebec, somewhere around 1950. He was ninth in a line of twelve children and always told me that when he left home at fourteen, no one noticed for at least a year.

Papa, as my father was known around town, was a frame and finish carpenter. As legend has it, he moved to New York and found work as a laborer on the St. Lawrence Seaway. During the course of his travels, he met a residential contractor who was building custom homes. He asked him if he would be willing teach him a trade so he could someday start his own business.

Papa had limited formal education, having left school in the third grade. His verbal English was rudimentary at best and reading and writing skills were almost nonexistent. But what he did have was physical strength and stamina, coordination, dexterity, mechanical acumen and as it turned out, the innate ability to solve complex geometry problems in his head.

By the time I came along, my father had built a successful construction company and was known locally for building quality homes. I grew up riding in the box he built on his forklift, high over the worksite — still terrified of heights, thanks Dad — picking up nails, stacking blocks of scrap wood, and watching my father manage site, crew, and client.

Papa wasn’t a businessman by any stretch. But he was a conscientious builder, never cutting corners, focused on building homes meant to last. I loved going to see him at his work. The smell of sawdust, getting mud on my Keds while stepping over the ruts the equipment made, watching as he and his men turned those stacks of 2x4s into beautiful skeletons, imagining what they would look like completed.

As I got older I was more interested in building, but dad would always laugh and say, “This isn’t work for a woman. Dee Dee, you aren’t strong enough. You aren’t accurate.”

He would laugh, “Babe, this isn’t work for a woman. It’s hard and it’s dirty. Go find something else to do.” I remember one summer asking him to help me finish the attic so I could have my own living space. He told me no. So I bought enough plywood to cover the floor, determined to figure it out by myself. He had learned how to do it and I was going to show him that I could too.

He watched amused as I hauled sheet after sheet up three narrow flights of stairs, finally joining me in the attic. “Okay, Dee Dee. This is how you do it. You get three strikes on a nail. That’s it. That’s how you nail down ply.”

What? I’m expected to knock a 3” bright nail into a floor joist in three strikes? Well, here goes nothing.

My father would never actually admit to participating in teaching me. I look back now and realize that he really felt that he was doing me a favor. He was trying to save me from a life of physical work — from choosing to do something that he did only because his lack of education meant he couldn’t do more. But he always let me watch him work.

As I got a little older and started working on my own projects, he would watch me work. I remember edging the paint on a ceiling one afternoon when he took the brush out of my hand. He showed me how to dip it properly, getting just the right amount of paint on the brush so that the edge would flow smoothly and I wouldn’t need to use tape.

To this day I count edging paint perfectly as one of my superpowers.

Dad inadvertently also taught me how not to do things, too. He was a man who, when faced with a hornet in the kitchen, would simply lick his thumb and crush it against the wall. This meant that when it came to chores like installing a new light switch, he would test the live wires in a similar manner.  He was famous for cutting plywood with a skill saw in his right hand, holding the sheet in his left. He had little regard for safety because like he said, he was accurate. And well, if he cut off a thumb? Nothing a little dirt and duct tape couldn’t cure.

I would overhear conversations about finances. Mom would be upset because he continued to pay his crew each week, even though there was no work to be done and no money coming in. His response, “You and the kids have everything you need? End of conversation.”

When I was a new graduate working my first job I was lamenting my poverty over dinner one night. Car payment, student loans, insurance, commuting costs — my meager salary just wasn’t covering it. Dad’s answer, “You need more, you work more. That’s how it works, kid.”

I took on two additional jobs and while I was tired, I felt confident knowing I was doing it on my own.

My father passed away peacefully this past January at the age of 84. I recently asked my son if he missed him. He said, “I do a bit, Mama. But he’s really still here.”

Our Max is right. Papa never was a teacher in the traditional sense, but he taught us much.

One of my favorite memories was a moment we shared reminiscing about a large renovation project we undertook as a family back in 2005. When we bought the house my father had warned, “You are out of your mind. I will be dead before this house is ever finished.” I said, “Dad, no disrespect, but you are 70. I am 30. You may be dead but I am confident I won’t be.” Our renovation project: Before Our renovation project: After

Thirteen years later, looking through some old before and after photos, he smiled up at me and said, “You know Dee Dee, You would have made one hell of a carpenter.” Refinishing Furniture: A Guide for Beginners 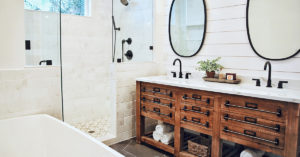 Bathroom Renovations to Age in Place Comfortably and Safely Platoon artist. Voted high school's "most likely to still be crafting in my thirties". Currently a hockey mom, theatre mom, caretaker for my elderly dad, veteran, HR professional. Aka "that woman you saw hauling a block of wood out of the ocean with a paintbrush in her other hand". Creativity is contagious. Don't aim for perfect, reach for happy.  Why do I do what I do? Because instead of occupying the mind, I want to inspire it.  Expressing my creativity, working my neurons and saving money. "Building stuff" is good for the soul and the wallet.